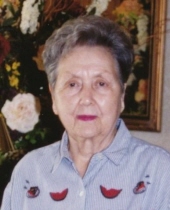 Pauline Cash, age 91, of Amity, died Saturday, June 22, 2013. She was born on July 13, 1921, at Alpine, the daughter of Charlie E. Thomasson and Birdie D. Johnson Thomasson. On February 17, 1941, she was married to Herchel E. Cash who preceded her in death on February 19, 2001. She was also preceded in death by her parents; and her son, Charles Cash. Pauline was a member of Amity First Baptist Church and was retired from Indianapolis Glove Factory. She enjoyed the outdoors, digging in her flower gardens, growing beautiful roses and raking leaves. She is survived by her daughter-in-law, Judy Cash of Amity; her grandson, Michael Cash of Little Rock; two sisters, Bonnie Jean Sayles of Colorado Springs, Colorado and Peggy Adams of Amity; and several nieces and nephews. Services will be held at 2:00 PM, Tuesday, June 25, 2013, in the Davis-Smith Funeral Home Chapel, Glenwood, with Bro. John McAnally officiating. Visitation will be held Monday evening, 6:00 PM until 8:00 PM. Interment will be in the Friendship Cemetery under the direction of Davis-Smith Funeral Home, Glenwood. Pallbearers will be Roy Rogers, Lance Maxey, Buddy Maxey, Johnny Francis, Johnny Gould and Glendil Fagan. Honorary pallbearers will be Dewey Nutt and Bruce Doster. In lieu of flowers, memorials may be made to the Friendship Cemetery Association, P.O. Box 7, Amity, Arkansas, 71921. Guest registry is at www.davis-smith.com.

To order memorial trees or send flowers to the family in memory of Pauline Cash, please visit our flower store.