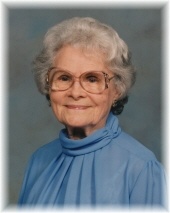 Pauline Golden, age 101, of Hopper, died Monday, February 23, 2015. She was born on July 17, 1913, at Hopper, the daughter of Dave Shields and Allie Bohannon Shields. She was married in 1933 to Clark Golden who preceded her in death on January 28, 1968. She was also preceded in death by her infant son, Billy Golden; her grandson, Matt Golden; her sister, Bernice Norwood; and her brother, Parks Shields. She was a long time member of the Glenwood Church of Christ before moving to Mount Ida and attending the Mount Ida Church of Christ. She is survived by her son and daughter-in-law, Chuck and Linda Golden of Hopper; two grandsons, David Golden of Fairfax, Virginia and Paul Golden of Hopper; and five great-grandchildren. Services will be held at 2:00 PM, Saturday, February 28, 2015, in the Davis-Smith Funeral Home Chapel, Glenwood, with David Golden and Doyle Shields officiating. Visitation will be held Saturday, 1:00 PM until service time, at the funeral home. Interment will be in the Hopper Cemetery. Pallbearers will be Paul Golden, Jake Golden, Brandon Golden, Alan Golden, Jeff Leonard and Ron Martin. Guest registry is at www.davis-smith.com.

To order memorial trees or send flowers to the family in memory of Pauline Golden, please visit our flower store.