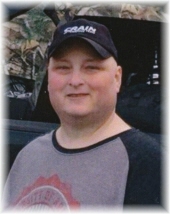 Randy Dewayne Golden, age 43, of Newhope, died Friday, June 5, 2015. He was born on December 1, 1971 at Hot Springs, the son of Junior Lee Golden and Wanda Lou Dumont Golden. He was preceded in death by his father. On August 21, 1992, he was married to Dedi Pate. He enjoyed his work as a logger and being in the outdoors. He loved hunting, fishing, cooking on the grill and sitting down with his guitar to strum out a few tunes. He especially enjoyed his family and playing with his twin grandsons. He is survived by his wife, Dedi Golden; his daughter and son-in-law, Kaylan and Justin Simmons; his grandsons, Kash and Hagen Simmons; his mother Wanda Golden; his brother, Donnie Golden; his sister and brother-in-law, Karen and Darin McCoy; his niece, Taylor Fant, all of Newhope; and his aunt, Ann Tidwell of Glenwood. Services will be held at 2:30 PM, Tuesday, June 9, 2015, in the Davis-Smith Funeral Home Chapel, Glenwood, with Bro. Josh Harper and Bro. Charlie Smith officiating. Visitation will be Monday, 6:00 PM until 8:00 PM. Interment will be in the Langley Hall Cemetery. Pallbearers will be Spud Moore, Brad Garner, Brad Whisenhunt, Keith Sirmon, Mike Ward, Jeff Tuttle, Jeff Icenhower and Adam Coffman. Honorary pallbearers will be Terry McCauley, Buster Roberts logging crew, Russell Young and Dewayne House. Guest registry is at www.davis-smith.com.

To order memorial trees or send flowers to the family in memory of Randy Dewayne Golden, please visit our flower store.