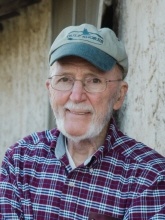 Richard D. Sorrells, age 77, of Royal, went to be with the Lord on the evening of Friday, April 3, 2020. He was born on December 1, 1942, in Royal, the son of Floyd Elmer Sorrells and Ruby Houser Sorrells. On June 20, 1965 he married Julia Graves. He was preceded in death by his parents; and one brother, Klugh Sorrells. He was member of Hot Springs Baptist Church where he has served as a Sunday School teacher and a Deacon Emeritus. Richard had a Masters Degree in Agriculture from the University of Arkansas and a Masters of Divinity from Tennessee Temple, Chattanooga, Tennessee. He was a loving husband, father, grandfather, great-grandfather and wonderful teacher to all those who were blessed to have known him. He and his brother Tom were a part of the Arkansas Farm Family of the Year in 2016. He is survived by his wife of 54 years, Julia Sorrells of Royal; one son and daughter-in-law, Jared and Heather Sorrells of Rogers; one daughter and son-in-law, Andrea and Thomas Wicker of Royal; four grandchildren, Lauren Wicker Wilson and her husband, Chevy and Carson Wicker and his wife, Deonna, all of Royal, Isla Sorrells and Asher Sorrells, both of Rogers; four great-grandchildren, Allison Wilson, Jessi Wilson, Nathaniel Wicker and Octavia Wicker; one brother and sister-in-law, Tom and Joy Sorrells of Royal; and numerous nieces, nephews, extended family members and a host of wonderful friends. Private graveside services will be held at 11:00 AM, Sunday, April 5, 2020, in the McDowell Cemetery with Chaplain John Goodman, Retired USAF officiating. Arrangements are under the direction of Davis-Smith Funeral Home, Hot Springs. Guest registry is at www.davis-smith.com.

To order memorial trees or send flowers to the family in memory of Richard D. Sorrells, please visit our flower store.