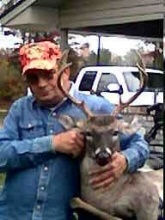 Ricky Lynn Hunter, age 62, of Athens, died Sunday, January 18, 2015. He was born on January 5, 1953, at Roseburg, Oregon the son of Q. D. Hunter and Velron Murphy Hunter. On December 19, 1975, he was married to Darla Webb. He was preceded in death by his father. He was Baptist in his faith and a heavy equipment operator. He dearly loved his family, who made his life complete, including the true love of his life, Darla, who he was blessed to have spent 39 wonderful years; his greatest accomplishment in his life were his children, who made him so proud; the light of his life, his precious granddaughter, Kaylie Raylynn, who lovingly called him "Taw Taw"; and he was honored to have worked with many fine co-workers who knew him as "Babydoll". Above all he was loved by everyone who knew him and he will be deeply missed. He is survived by his wife, Darla Hunter of Athens; his son, Todd Hunter of Bentonville; his daughter and son-in-law, Tracy and Stacey Stone of Gurdon; his precious granddaughter, Kaylie Raylynn Stone of Gurdon; his mother, Velron Murphy Young of Newhope; two brothers and one sister-in-law, Ronnie and Rhonda Hunter and Randy Hunter, all of Newhope; two nieces; and a host of wonderful friends. Services will be held at 1:00 PM, Friday, January 23, 2015, in the Davis-Smith Funeral Home Chapel in Glenwood with Bro. Marcus Crawley officiating. Visitation will be held Thursday, 6:00 PM until 8:00 PM. Interment will be in the Cecil Chapel Cemetery in Vandervoort under the direction of Davis-Smith Funeral Home, Glenwood. Pallbearers will be Bruce Cureton, Joe Williams, Jerry Robb, Jamie Ralls, Jason Youngblood and Clay Philpot. Honorary pallbearers will be Jerry Lewis and Richard Broach. Guest registry is at www.davis-smith.com.

To order memorial trees or send flowers to the family in memory of Ricky Lynn Hunter, please visit our flower store.