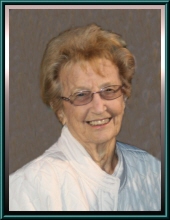 Robbye Ruth "Totsie" Chaney, age 90, of Murfreesboro, passed away on Friday, April 15, 2016. She was born on October 7, 1925 in Murfreesboro, the daughter of Lucious Malachi "Mallie" Crocker and Maude Belle Kizzia Crocker. On August 14, 1943, she was married to Leon Chaney who preceded her in death on May 14, 2010. She was also preceded in death by her brother, John Rayburn Crocker. She was a member of the First Christian Church and had been since she was 13 years old. She was a homemaker and wonderful seamstress. Since 1962, she would meet every weekday with her dearest friends called "the Coffee Bunch." She loved taking care of her grandchildren and great-grandchildren. Totsie will be greatly missed by all of her family and friends. She is survived by two sons and daughters-in-law, James L., Jr. and Theresa Chaney of Pensacola, Florida and Matthew D., IV, and Lisa Chaney of Murfreesboro; her daughter and son-in-law, Carol and Thomas Strawn of Murfreesboro; seven grandchildren, Brent Strawn, Amanda Henry, Priscilla Faulkner, Kimber Huss, Matthew D. Chaney, V, Stephanie Plyler and Ben Chaney; eleven great-grandchildren, Dillon Strawn, Haley Henry, Hannah Huss, Lexi Henry, Matthew D. Chaney, VI, Gage Huss, Alex Huss, Colten Plyler, Rex Faulkner, Lincoln Faulkner, Madison Moody and Kelsi Moody; and two great-great-grandchildren, Harper Stout and Henley Kate Frachiseur. Services will be held at 10:00 AM, Tuesday, April 19, 2016, in the First Christian Church with Rob Evans and Bro. Bob James officiating. Visitation will be Monday, 6:00 PM until 8:00 PM, at the First Christian Church. Interment will be in Murfreesboro Cemetery under the direction of Davis-Smith Funeral Home, Glenwood. Pallbearers will be Brent Strawn, Ben Chaney, John Michael Crocker, Jason Faulkner, Andrew Vitzthum and David Henry. Guest registry is at www.davis-smith.com.

To order memorial trees or send flowers to the family in memory of Robbye Ruth "Totsie" Chaney, please visit our flower store.