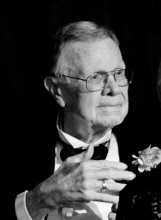 Robert Dean Lotridge, Sr., a member of the Greatest Generation, was promoted to be with his Lord Jesus Christ on March 19, 2015. Bob was born on April 9, 1926 in Blytheville, Arkansas, the youngest son of Lester Lotridge and Stella Story Lotridge. He was preceded in death by his parents, his brothers Bruce Lotridge and William Lester Lotridge, and his sister Marie Bates. Bob was an Elder, retired, for Canyon Creek Presbyterian Church in Richardson, Texas, having served the church since 1966. He is survived by his college sweetheart, Dorotha Lorene Black Lotridge. Bob and Lorene have been married for 64 years and have two sons and one daughter: Robert Dean Lotridge, Jr. and his wife Randy Jones Lotridge of The Woodlands, Texas, Stanley Warren Lotridge and his wife Barbara Harger Lotridge of Plano, Texas, and Joanna Lotridge Pickard and her husband Tom Pickard of Broken Arrow, Oklahoma. Bob and Lorene have two granddaughters, Major Jessica Lotridge Beaulieu, MD and her husband Captain Steven Beaulieu of Cambridge, England and Chandler Warren Lotridge of Plano, Texas, as well as numerous nieces and nephews who loved him dearly. Bob's twin sister, Rebecca Bernard of Forrest City, Arkansas will carry on the memories of the day she and Bob were homecoming king and queen at Wynne, Arkansas! Bob was a star athlete at Wynne High School, naturally gifted in every sport, earning a scholarship to Louisiana State University. His college career was interrupted by the call to serve in World War II. Bob served in the US Army, landing in Europe at the conclusion of the Battle of the Bulge. It was not until just recently that he talked about his specific experiences in Europe and the difficult task assigned to him and his team to notify the families of those brave Americans killed in liberating Europe. At the conclusion of the War in Europe, his battalion was being prepared for the invasion of Japan. The Lord intervened and Japan surrendered before that battle began. After his discharge, Bob enrolled at Arkansas College to play football for his high school coach, Coach Paul McFerran. He was the quarterback and captain of the first Arkansas College team composed of returning World War II veterans. He was a 4-sport letterman in football, track, tennis, and golf. An outstanding passer and punter, he was nominated to the Little All American Football team. Arkansas College, now Lyon College, recently restarted their football program. That really brought back many fond memories for him and how he wished his offensive line had been a little bigger! A short high school coaching career led Bob to work as a supervisor for DuPont in Louisville, Kentucky. His love of coaching and young people led him to part-time management of the Boys Clubs of America chapter in Louisville, Kentucky. Bob and the family moved to Magnolia, Arkansas, where he organized and developed the Boys Club chapter there. He later took on the challenge of managing the multicultural Boys Clubs of El Paso, Texas. Bob was asked to serve as a Regional Director of Boys Clubs of America, moving to Dallas, Texas in 1965. The demands of a growing family led Bob to take on a lead sales position with a new plastic extrusion company, Vinylx, in Farmers Branch, Texas. This sales experience took Bob to several positions ending with Phillips Petroleum. Bob loved his wife and children dearly. We all can remember his special whistle while we were playing sports or performing on drill team. He was especially pleased to have the honor of pinning on his granddaughter Jessica's Lieutenant Bars at her commissioning as part of her graduation from the United States Air Force Academy and at his granddaughter Chandler's high school graduation from Trinity Christian where he proudly stood and said "Way to go, Potato Chip" to the cheers of the auditorium! Bob was an avid sports fan and loved his Arkansas Razorbacks, as well as fishing, hunting, and all of his dogs and cats. The last several years have been filled with wonderful memories for all of us enjoying his beloved Caddo Ridge cabin in Arkansas. We all have confidence that we will be reunited with Dad again with the Lord Jesus Christ. We celebrate his promotion, and we salute him. Graveside service with military honors will be held at 11:00 AM, Thursday, March 26, 2015, in the Gaston Cemetery, Black Springs with Dr. Gary Jones officiating. Visitation will be Wednesday, 6:00 PM until 8:00 PM, at the funeral home. Arrangements are under the direction of Davis-Smith Funeral Home, Glenwood. In lieu of flowers, a donation in Dad's memory to the American Heart Association or the American Kidney Foundation would be appreciated. Guest registry is at www.davis-smith.com.

To order memorial trees or send flowers to the family in memory of Robert Dean Lotridge, Sr., please visit our flower store.