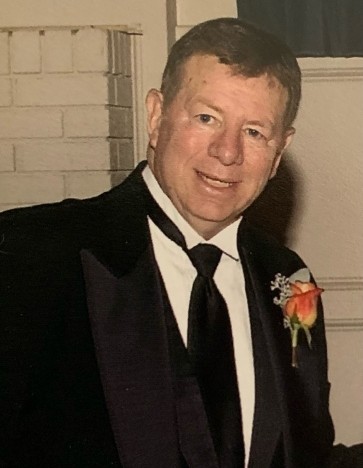 Ron was born in North Little Rock, Arkansas to the late Bobby Joe and Almarie Todd Cook. He grew up in NLR and graduated from NLR High School. He obtained a degree in Respiratory Therapy and eventually became Director of Respiratory Therapy at Baptist Memorial Hospital.  After leaving this position he worked in medical sales where he received many sales awards and finally retired from the Little Rock VA Medical Center Respiratory Department.

He had many interests and pursued them all with enthusiasm.  When able, he enjoyed hunting and the outdoors. He loved sports either as a participant or spectator.  His involvement in sports included coaching junior football teams, coaching grade school boys’ basketball, and playing on work and church softball teams.  His favorite sports teams were St. Louis Cardinals, Dallas Cowboys, Arkansas Razorbacks, Blackburn College (IL) Beavers, and any Central Arkansas Christian School team.

Judy Hobbs and Ron were married in 1980 and their family grew to include two children, Laurie and James. During the children’s school years, he attended every grade school music program, dance recital, high school play, chorus performance and sporting event.  He was in charge of the high school concession stand for CAC football and basketball games for several years and would receive compliments like “this is the best concession stand around”.  He served as PFTA President and on the CAC Development Council.

The family attended Sylvan Hills Church of Christ.  Ron taught in the Children’s’  Worship Program when his children were young , planned and helped cook, church wide fellowship dinners, chaperoned youth trips and was instrumental in starting the Sylvan Hills Medical Missions Program alongside Drs. Danny and Nancy Smelser. He was the deacon over the Medical Mission Program for many years.  He was involved in planning and organizing at least 30 campaigns to Anguilla, Jamaica, Antigua, Mexico and Nicaragua.  Many lives were touched medically and spiritually as a result of these trips.

Ron was a member of the US Army Reserves and was assigned to the 810th Station Hospital at Camp Pike in NLR.  He retired after 28 years of service.  His last duty position was 1st Sergeant.  During Operation Desert Storm he was activated and ordered to report to Ft Hood, Texas where he stayed in support of the war for 6 months.

At age 50 he suffered a catastrophic stroke resulting in severe right sided weakness. He was determined to overcome his disabilities and never gave up. He would never been able to accomplish this without the support of his children.  Following the stroke he continued to plan trips and then traveled internationally with the mission team on 11 trips.  He also travelled to Havana, Cuba to attend an evangelistic conference in support of the preachers supported by Sylvan Hills Church of Christ

Life with Ron was never boring. He involved his family and friends in numerous projects and schemes.  He was continually thinking of ways to spread the Gospel and help others. He had a remarkable memory for people, dates, times, addresses, and directions.  He never met a stranger.  He was most happy when he was with his children and grandchildren. His family was extremely important to him and he was proud of his children and would talk about them to anyone who would listen.

Pallbearers at the church include best friends Lee Beason, Gene Carr, Ray Culvey, Marvin Fisher, Charles Fultz, and Dan McInturff. Honorary pallbearers are Wayne Welford and Billy Byrd who were always available to Ron whenever he needed them.

In lieu of flowers, donations can be made to support mission efforts across the globe:

To order memorial trees or send flowers to the family in memory of Rondal Cook, please visit our flower store.
Send a Sympathy Card