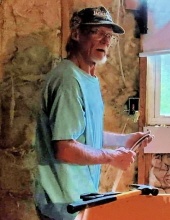 He was born on January 31, 1962 in San Jose, California and was raised by his grandparents, Onnie Blain Cossy and Edna Mary Irvin Cossy, who have preceded him in death.

Ronnie was a carpenter by trade and enjoyed working on small engines on the side.

He is survived by his four siblings, Michael Wayne Bates of Nashville, James Perry Morris of Dixon, California, Theresa Marie Wright of Nashville and Charlotte Lynn Quimby of New Edinburg, Arkansas; and his nieces and nephews.

A private family memorial service will be held following cremation.

Arrangements are under the direction of Davis-Smith Funeral Home and Crematory, Glenwood.

To order memorial trees or send flowers to the family in memory of Ronnie Morris, please visit our flower store.