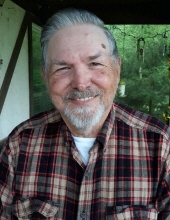 He was born on January 11, 1944 in Los Angeles, California, the son of Cecil Fleming and Susan Booth Fleming. On June 16, 1962, he was married to Glenda Jane Cureton Fleming who preceded him in death on April 26, 2015. He was also preceded in death by his granddaughter, Jaime Lynn Fleming; his brother, Tommy Fleming; and his sister, Phoenicia Ashfield.

Ronnie was raised in Caddo Gap and was valedictorian of his graduating class of Caddo Gap High School. After a year attending Henderson State College, he worked on pipelines in several different states. In 1965, he joined the United States Navy and retired after twenty-one years of service as a cryptologic technician. He and Glenda raised their children while living on many naval bases across the nation. In 1986, Ronnie moved his wife and daughter to Newhope where he began his next career as a chicken farmer. Ronnie enjoyed hunting and fishing, and will be missed by all who knew and loved him.

Graveside services will be held at 2:00 PM, Sunday, August 30, 2020, in the Fleming Cemetery at Highway 270 East and Fleetwood Drive in Hot Springs, with Rev. Carroll Jackson officiating. Military honors will be provided by the United States Navy Honor Guard.

To order memorial trees or send flowers to the family in memory of Ronnie P. Fleming, Sr., please visit our flower store.