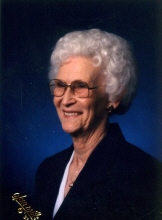 Ruth Bettis Merriott, age 83, of Hot Springs, died Tuesday, January 11, 2011, after a short illness. She was born on December 6, 1927, at Hot Springs, the daughter of James B. Bettis and Gladys Mae Boyd Bettis. She was preceded in death by her husband, Gleen Merriott, her parents, and her brothers and sisters. She is survived by her daughter and son-in-law, Glenda Ruth and James Carter; three grandchildren, Stephen Gleen Roberts and wife, Erin, Richard Lee Roberts, and Ruth Ann Allred-Blackmon and husband, Billy; four great-grandchildren, Clinton Perry Allred, Nathan Del Allred, Hunter Gleen Roberts and Hailey Kathleen Roberts. A memorial service will be held at a later date. Arrangements were made under the direction of Davis-Smith Funeral Home, Hot Springs. Guest registry is www.davis-smith.com

To order memorial trees or send flowers to the family in memory of Ruth Bettis Merriott, please visit our flower store.

memorial at a later date