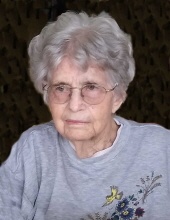 She was born on October 14, 1926 in Oden, the daughter of Harvey Cobb and Inez Gaston Cobb. On March 7, 1942, she was married to Carlton Charlie Fryar who preceded her in death on October 29, 2011. She was also preceded in death by her grandson, Darren Fryar; her daughter-in-law, Tammy Fryar; her step-mother, Myrtle Cobb; and two brothers, H. T. Cobb and Lonnie Cobb.

She was a member of Mount Olive Missionary Baptist Church and loved to cook. She enjoyed making fruit cakes and all sorts of candies to share with everyone at Christmas time and her family knew it was always going to be a special meal when they sat down at her table. Not only a homemaker, she was very active working as a farmer. While she was able, she loved to ride the ATV around the farm and also quilting. She loved and cared for all animals, especially her dogs.

She is survived by three sons and daughters-in-law, Harry and Debbie Fryar, Charlie and Sandy Fryar and Jimmy and Beth Fryar, all of Oden; two daughters and sons-in-law, Virginia and Glen Hatton of Sims and Connie and Johnny Smith of Story; seven grandchildren and their spouses, Dale and Sherrie Hatton of Mount Ida, Mark Hatton of Sims, Penny and Greg Bader of Fort Smith, Roger and Samantha Smith of Story, James Smith of Hope, Russell and Hether Fryar of Atoka, Tennessee and Jeffrey and Melissa Gage of Arvada, Colorado; ten great-grandchildren; three great-great-grandchildren; her brother and sister-in-law, Bill and Wynema Cobb of Mount Ida; her sister, Ruthie Mae Burns of Hot Springs; and her nieces and nephews.

Graveside services will be held at 10:00 AM, Tuesday, September 8, 2020, in the Mount Olive Cemetery with Bro. Arlie Francis officiating.

Honorary pallbearers will be her grandchildren and the nurses and staff of Montgomery County Nursing Home.

To order memorial trees or send flowers to the family in memory of Ruth Fryar, please visit our flower store.