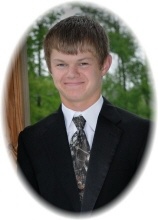 Ryan Mason Swain, age 17, of Amity, died Saturday, September 7, 2013. He was born on January 18, 1996 at Henderson, Kentucky, the son of Charles Swain and Christy Ainsworth Swain. Ryan was a senior at Centerpoint High School where he played football and baseball. He was also vice-president of the Future Farmers of America. He was a member of Bethel Missionary Baptist Church. Ryan was an avid hunter and fisherman. Ryan's future plans were to enroll at Southern Arkansas University and to become a Wildlife Officer with the Arkansas Game and Fish Commission. Survivors include his parents, Charles and Christy Swain of Amity; his brother, Blake Swain of Amity; his paternal grandparents, Richard and Shirley Swain of Ruby, Louisiana; his maternal grandparents, Larry and Carolyn Ainsworth of Oak Grove, Louisiana; his maternal great-grandmother, Artie Lee Evans of Oak Grove, Louisiana; and his uncles and aunts, Dickey and Linda Swain of Ruby, Louisiana, Thomas and Sheila Swain of Deville, Louisiana, Jason and Sarah Swain of Dalhart, Texas and Ki and Paul Eaton of West Monroe, Louisiana. Services will be held at 10:00 AM, Tuesday, September 10, 2013, in the Bethel Missionary Baptist Church with Bro. Keith Shewbart and Bro. Jeremy Graves officiating. Visitation will be held Monday, 6:00 PM until 8:00 PM, at Bethel Missionary Baptist Church. Interment will be in the Bethel Cemetery under the direction of Davis-Smith Funeral Home, Glenwood. Pallbearers will be Phillip Thomas, Jerry Fendley, Cary Rogers, Nick Mounts, Kevin Owens, John Harless and John Bright. Memorials may be made to the Centerpoint High School Athletics Booster's Club, Attention: Lawanda Bright, 755 Hwy. 8 East, Amity, Arkansas, 71921. Guest registry is at www.davis-smith.com.

To order memorial trees or send flowers to the family in memory of Ryan Mason Swain, please visit our flower store.