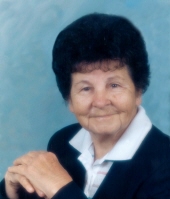 Sara Doss, age 96, of Glenwood, passed away on Friday, January 24, 2020. She was born on January 2, 1924, in Monroe, Louisiana, the daughter of John H. Butler and Sadie Helen Kellogg Butler. She was preceded in death by her first husband, the father of her children, John Ray Naron; her son, Marvin Glenn Naron her parents; and her siblings, Edna Huddleston, Herbert Butler and Bill Butler. For many years Sara worked for Atlantic Research Corporation as a security guard, which she loved and was a dedicated employee until the company closed and she took retirement. She enjoyed quilting and loved to mow and work in her yard. She is survived by her son and daughter-in-law, Jack and Donna Naron of Lodi; six grandchildren and their spouses, Jonathan and Renea Naron, Rebecca and Jonathan Brown, Sidney and Dawn Main, Kevin and Susie Main, Lenon and Becky Main and Carl Main; eight great-grandchildren, Alexandra, Joey, Michael, Zachary, Kirklin, Chanidy, Madison and Kelsey; four great-great-grandchildren, Easton, Stetson, Nora and Olivia; numerous nieces, nephews and extended family members and a host of wonderful friends. Funeral services will be held at 2:00 PM, Tuesday, January 28, 2020, in the Davis-Smith Funeral Home Chapel, Glenwood with Pastor Brian Ferrell officiating. Interment will be in the Oak Grove Cemetery, near Caddo Gap. Pallbearers will be Jonathan Naron, Lenon Main, Clark Kinzler, Greg Harmon, Jeremy Collums and Billy Cogburn. Honorary pallbearers will be Jessie Cogburn, Ned Tucker, Chris Thompson and the nurses and staff of Glenwood Health and Rehab. Guest registry is at www.davis-smith.com.

To order memorial trees or send flowers to the family in memory of Sara Doss, please visit our flower store.