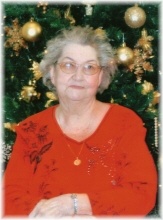 Sarah E. Vaught Miles, age 81, of Glenwood, passed away Tuesday, April 19, 2016. She was born on August 22, 1934, in Caddo Gap, the daughter of Hugh R. Vaught and Marie Boone Vaught. On February 4, 1952, she was married to Bobby Miles who preceded her in death on March 23, 2012. She was also preceded in death by her parents; and her sister, Ramona Moore. She was a Christian in her faith, enjoyed singing, listening to country music and spending time at the Senior Adult Center. She had a great love for animals and going on long country rides with her husband and their dog, Trixie. She is survived by two daughters and sons-in-law, Paula and Jeff Walkowiak and Anita and Chris Hill, all of Glenwood; one grandson, Matthew Lowrey and his wife, KC, of Glenwood; two granddaughters and their spouses, Melinda and Zach Tucker of Hot Springs and Kristen and Jake Raines of Glenwood; four great-grandchildren, Isabella and Miranda Lowrey, Eli and Jaxon Raines; one brother, Jerry Vaught of Athens, Texas; one sister-in-law, Marcia Miles of Athens, Texas; and several nieces and nephews. Services will be held at 10:00 AM, Thursday, April 21, 2016, in the Davis-Smith Funeral Home Chapel in Glenwood with Bro. Jack Herring officiating. Visitation will be held Thursday, 9:00 AM until service time. Interment will be in the Bethel Cemetery. Pallbearers will be Jake Raines, Zach Tucker, Rodney Woodard, Lee Roy Johnson, Ken Vaughn and John Miles. Honorary pallbearers will be the nurses and staff of the Glenwood Health and Rehab and Hospice Home Care of Hot Springs. In lieu of flowers, memorials may be made to the Bethel Cemetery Association, P.O. Box 1433, Glenwood, Arkansas, 71943. Guest registry is at www.davis-smith.com.

To order memorial trees or send flowers to the family in memory of Sarah E. Vaught Miles, please visit our flower store.