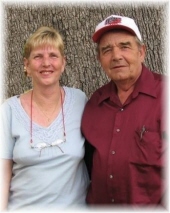 Sharon Kay Wicker Dycus, age 60, of Glenwood, passed away Monday, October, 7, 2013. She was born on June 29, 1953, at Prescott, the daughter of Shelton Thomas Wicker and Irene Smith Wicker. On July 3, 1969, she married Ronald Lee Dycus. She was preceded in death by her parents; three brothers, Edward Wicker, Bobby Dale Wicker and Terry Dale Wicker; and one sister, Sherry Gail Zumwalt. Sharon was a Christian in her faith, enjoyed crocheting, working in her yard, decorating it with her collection of frogs, and collecting Tweety Bird and Elvis Presley memorabilia. She cared for several family members at the Glenwood Health and Rehab and continued to enjoy volunteering with her husband by her side. She was the cornerstone, anchor and the planner for her family. Her children and grandchildren were honored to share her with their friends, allowing Sharon to be an adoptive mother and "Nana" to many. Sharon was a loving wife, best friend and soul mate to Ronnie for over 44 years. She is survived by her husband, Ronnie Dycus of Glenwood; one son and daughter-in-law, Chet and Mandy Dycus of Mena; two daughters and sons-in-law, Melissa and David Davis of Glenwood and Sherrie and Clay Shinn of North Little Rock; five grandchildren, Kaylee, Morgan, Colton, Kyndall and Lauren Grace; one brother and sister-in-law, Gilbert and Mary Wicker of Emmett; three sisters and two brothers-in-law, Edna Mae Tunnell of Tomball, Texas, Martha Faye and Sam Parmer of Prescott and Betty Sue and Oliver McKamie of Hope; one brother-in-law and sister-in-law, Mike and Mary Dycus of Glenwood; and many nieces and nephews. Services will be held at 2:00 PM, Wednesday, October 9, 2013, in the Davis-Smith Funeral Home Chapel in Glenwood, with Bro. J. B. Evans and Bro. Oliver McKamie officiating. Visitation will be Tuesday evening, 6:00 PM until 8:00 PM. Interment will be in the Black Springs Cemetery under the direction of Davis-Smith Funeral Home, Glenwood. Pallbearers will be Thomas Wicker, Chris Parmer, Marty McKamie, Art Stringer, Jerry Tittle and Keith Horn. Honorary pallbearers will be Dr. Edward Warren and his staff, the nurses and staff of National Park Medical Center ICU and the residents and staff of Glenwood Health and Rehab. Guest registry is at www.davis-smith .com.

To order memorial trees or send flowers to the family in memory of Sharon Kay Wicker Dycus, please visit our flower store.