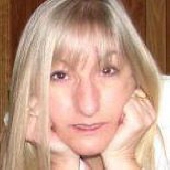 Sharon Lynn Ritch, age 54, of Daisy, passed away Sunday, August 23, 2015. She was born on July 10, 1961 at Arkadelphia, the daughter of William Herman Crow and Emma Ruth Cooley Crow. She was preceded in death by her parents. Sharon was a Christian in her faith. She was a cat lover and enjoyed photography. She worked as a dog groomer in California and after moving back to Arkansas, she worked for Colton's Restaurant in Hot Springs. She is survived by two daughters, Salina Cook of Oregon and Joncie Ritch of Susanville, California; three grandchildren; one brother, Bill (Stefanie) Crow of Daisy; two sisters, Sheila (Toby) Barr of Daisy and Mashae Brown of Glenwood; and several nieces and nephews. Cremation arrangements are under the direction of Davis-Smith Funeral Home, Glenwood. Guest registry is at www.davis-smith.com.

To order memorial trees or send flowers to the family in memory of Sharon Lynn Ritch, please visit our flower store.