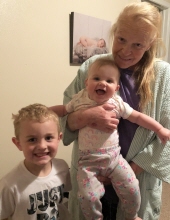 She was born on January 4, 1966, in North Bend, Oregon, the daughter of Edward Jo Herink, Sr., and Jane Louise Freerksen Herink. She is also preceded in death by her parents.

Shellene was a Christian in her faith and a member of the Apostolic Faith Tabernacle. She is a Navy Veteran and was stationed in Guam. She was a loving mother and sister who will be greatly missed by all who knew and loved her.

She is survived by her son, Steven Starr of Hot Springs; her daughter and son-in-law, Ashley and Kenneth McKenzie of Caldwell, Idaho; two grandchildren, Ryder Luther and Everly Luther; three brothers and two sisters-in-law, Ed Herink of Traer, Iowa, Jim and Debbie Herink of Ankeny, Iowa and Dennis and Wachara Herink of Ankeny, Iowa; her sister and brother-in-law, Cindy and Robert Casto of Amity; numerous nieces, nephews, extended family and a host of wonderful friends.

To order memorial trees or send flowers to the family in memory of Shellene Louise Hallmark, please visit our flower store.