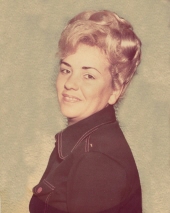 Shirley Nell Anderson, age 73, of Amity, died Monday, February 9, 2015. She was born on July 28, 1941, in Bodcaw, the daughter of Russell Wilder and Nellie Edith Newton Wilder. She was preceded in death by her father, Russell Wilder; her companion, Jack Robinson; her first husband and father of her children, Donald Anderson; and dear friend, G. W. "Rocky" Bailey. She was a member of the Bethlehem Missionary Baptist Church in Kirby and a homemaker. A loving, dedicated and doting daughter, mother, grandma, great-grandma and loyal friend, Shirley's greatest joy in life was spending time with her family and was a grandmother to everyone in her neighborhood. She enjoyed fishing, camping, feeding her hummingbirds and taking care of her animals. She is survived by her mother, Nellie Edith Wilder Spencer of Glenwood; two sons and one daughter-in-law, Billy Don Anderson of Amity and Don and Glenda Anderson of Glenwood; four siblings and their spouses, James and April Wilder of Amity, Glen and Elaine Wilder of Amity, Jack and Sondra Spencer of Clovis, New Mexico and Steve and Donna Spencer of Oklahoma City, Oklahoma; eight grandchildren and their spouses, Misty and Jody Howell of Amity, John Anderson of Amity, Brandon and Melissa Anderson of Broken Bow, Oklahoma, Jeremy and Ariel Anderson of Deer, Arkansas, Shannen and Charlie Cogburn of Glenwood, Deana Anderson her fianc, Tyler, of Kirby, Chenoa and Austin Ramsey of Glenwood and Mitchell and Olivia Ritch of Virginia; ten great-grandchildren, Amy Sorrells, Clayton Boyd, Nicole Anderson, Dana Anderson, Allison Anderson, Derek Anderson, Aaron Anderson, Shysie Cogburn, Carter Anderson and Zeke Cogburn; and a host of nieces, nephews, cousins and friends. Memorial services will be held at 2:00 PM, Saturday, February 21, 2015, in the Davis-Smith Funeral Home Chapel in Glenwood with Bro. Keith Howell officiating. Guest registry is at www.davis-smith.com.

To order memorial trees or send flowers to the family in memory of Shirley Nell Anderson, please visit our flower store.