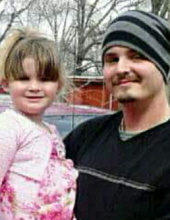 He was born on May 11, 1989, in Clifton, Texas. He was preceded in death by his father, Ronald G. Wallace, Jr.; and his grandparents, Darlene Martin and William Joseph Campbell.

He enjoyed the outdoors and riding four-wheelers. Joey truly loved his family and his greatest joy in life was spending time with his daughter, who he loved with all his heart.

He is survived by his daughter, Haley Cheyanne Wright of Amity; his mother, Jolynn Wallace; two brothers and one sister-in-law, William and Stephani Campbell and Zachary Campbell, all of Amity; his stepdaughter, Isabella Wooten and the mother of his children, Sarah Jade Wright, both of Amity; one niece, Amelia Campbell; three nephews, William “Liam” Campbell, Malachi Campbell and Peyton Cleaver; and numerous extended family members and friends.

Cremation arrangements are under the direction of Davis-Smith Funeral Home and Crematory, Glenwood.

To order memorial trees or send flowers to the family in memory of Steven Joseph "Joey" Campbell, please visit our flower store.