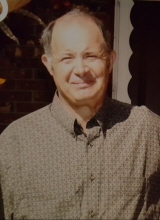 Terry Garrison, age 66, of Dierks, passed away on Friday, August 10, 2018. He was born on August 2, 1952, in Nashville, the son of Willard B. Garrison and Cloteel Glasgow Garrison. On May 3, 1986, he was married to Jenny Henry Garrison, who preceded him in death on December 14, 2016. He was also preceded in death by his parents; and his brother, Jerry Garrison. He was employed for over 40 years with Weyerhaeuser until his retirement. He enjoyed working with his cows and spending time taking care of his dog, Fred. He is survived by his mother-in-law, Betty Henry of Newhope; his sister-in-law, Mary Powers and her husband, John David of Dierks; his brother-in-law, Ray Henry and his wife, Derenda of De Queen; his aunt, Linda Duggan of Dierks; two nephews, Grant Hardin and Logan Henry; two nieces, Kayla Connor and her husband, Kirt, and Paige Henry; several cousins, extended family members and a host of wonderful friends. Services will be held at 10:00 AM, Monday, August 13, 2018, in the Mount Joy Free Will Baptist Church with Bro. Gary Welch officiating. Visitation will be held Monday, 9:00 AM until 10:00 AM, prior to the services at the church. Interment will be in the Mount Joy Cemetery under the direction of Davis-Smith Funeral Home, Glenwood. Pallbearers will be Grant Hardin, Logan Henry, Randy Dowdy, Red Hunter, Phillip Glasgow and Kirt Connor. Guest registry is at www.davis-smith.com.

To order memorial trees or send flowers to the family in memory of Terry Garrison, please visit our flower store.