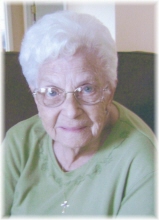 Virginia "Lee" Todoroff, age 93, a former resident of California and Glenwood, who resided at Montgomery County Nursing Home in Mount Ida, passed away Sunday, April 26, 2015. She was born in Independence, Iowa on September 8, 1921, the only child of Leonard and Kathryn Hinman. She retired at the age of 84 from The Hilton Palm Springs Resort in California, where she had been a switchboard operator for many years. Although Lee had no surviving family members, she left behind several special friends, whom she considered "family"; Herman and Barbara Brown, Russell and Sharon McGough, Robert and Georgette Snyder and Mary Patricia Dillard, all of Glenwood; Barry Brown of San Diego, California; and Brian Wickland of Palm Springs, California. We especially would like to thank the staff at Montgomery County Nursing Home for the kind and loving care they gave Lee, during her stay there with them. There will be no calling hours. Burial will take place at a later date, in the Nelson Cemetery, Old Caddo Gap Trail, in Montgomery County, Arkansas. Arrangements were under the direction of Davis-Smith Funeral Home, Glenwood. Guest registry is at www.davis-smith.com.

To order memorial trees or send flowers to the family in memory of Virginia "Lee" Todoroff, please visit our flower store.

cremation - burial will take place at a later date