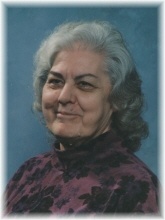 Wanda Marie Wilson, age 78, of Caddo Gap, Arkansas, died Sunday, May 4, 2014. She was born on January 13, 1936 in Stillwell Oklahoma, the daughter of Perry Lee Heritage and Lorene Marie Heritage. She was the companion of Ferrell Clements and the widow of Wade Wilson. She was also preceded in death by both of her parents, her son, Bobby Eugene Rogers, a brother, Charles Heritage and a sister, Barbara Operia. She was a Christian in her faith and attended the Hilltop Full Gospel Church. For years she volunteered her time working with the Area Agency on Aging and received a Citation of Recognition from the state of Arkansas for her service to the elderly. Her greatest past time was studying the Bible, reading, watching the beautiful birds eat from her numerous bird houses, and, when she was able, tending to her beautiful flowers. She is survived by two daughters, Rebecca McCoy and her spouse, Kenneth, of Gans, Oklahoma, and Wilma Cedeno of Neptune, New Jersey; a brother, David Heritage and his spouse, Shirley, of Yakima, Washington; a brother, Daniel Heritage and his spouse, Jean, of Akins, Oklahoma; and a sister, Naomi Pardon and her spouse, Charles , of Walkerton, Virginia. She also had numerous grandchildren and great- grandchildren, several nieces, nephews and a host of wonderful friends in various states across the country. A small Memorial service for family and friends will be held at the Davis-Smith Funeral Home in Glenwood on Wednesday, May 7, 2014, at 2:00 pm. Arrangements are under the direction of Davis-Smith Funeral Home, Glenwood. Guest registry is at www.davis-smith.com.

To order memorial trees or send flowers to the family in memory of Wanda Marie Wilson, please visit our flower store.