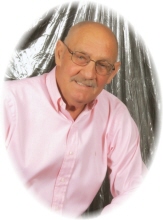 William "Don" Peppers, age 77, of Glenwood, died Wednesday, February 25, 2015. He was born on January 29, 1938, in Norman, the son of William R. Pepper and Dell Montgomery Pepper. On February 8, 1959, he married Marquetta Perrin. He was preceded in death by his granddaughter, Hope Reid; his parents; and his brother and sister-in-law, Dennis and Arvadella "Wally" Peppers. A carpenter by trade, Don was a fifty year member of the Brotherhood of Carpenters and Joiners of America, holding the rank of Master Carpenter. He was a U.S. Army Veteran and also an active member of Grace Baptist Church. He is survived by his wife, Marquetta Peppers of Glenwood; two children and their spouses, Kelli and Thomas Gannon of Glenwood, and Ki Perrin and Holly Peppers of Fayetteville; four grandchildren and their spouses, Kaci and Crystal Reid, Kadi and Adam Harris, Evelyn Peppers, and Gideon Peppers; four great-grandchildren, Tyler Tidwell, Karlie Reid, William Gage Reid, and Brooke Reid; one brother and sister-in-law, Paul and Treva Peppers of Glenwood; and a host of nieces and nephews. Services will be held at 2:00 PM, Sunday, March 1, 2015, in the Davis-Smith Funeral Home Chapel, Glenwood with Bro. James Owens, Bro. Bobby Golden, and Bro. Kevin Smead officiating. Visitation will be Saturday, 6:00 PM until 8:00 PM, at the funeral home. Interment will be in the Mount Tabor Cemetery. Pallbearers will be Howard Kemp, Davy Breshears, Johnny Jester, Eddie Bright, Buster Wright, Lewis Sims, Ray Connell and Tim Robbins. Honorary pallbearers will be Dr. Matthew Hulsey, Ronnie Ashbrook, LPN and the nurses and staff of Glenwood Family Medicine, Brenda Cox, RN, Carla Morrison, RN and staff of Hospice of Central Arkansas. Guest registry is at www.davis-smith.com.

To order memorial trees or send flowers to the family in memory of William "Don" Peppers, please visit our flower store.