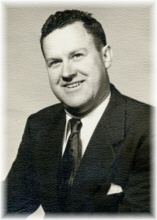 William Fay Bohannon, age 92, of Little Rock, died Monday, May 5, 2014. He was born on September 20, 1921 at Hopper, the son of William "Bill" Bohannon and Georgie Horn Bohannon. On January 22, 1948, he was married to Eloise Brakefield. A United States Army veteran of World War II, he served in the European Theater. He was an educator for over 39 years and worked as a teacher, coach, principal and superintendent. He served in the Norman Public School System and the Murfreesboro Public School System. In 1963, he went to work for the Arkansas Department of Education. On Sundays, he and Eloise would travel from Little Rock to attend church at the Hopper Church of Christ where he served as an Elder for over 50 years. In later years, they attended the Mabelvale Church of Christ. He is survived by his wife, Eloise Bohannon of Little Rock; two sons and daughters-in-law, Stanley and Carolyn Bohannon of Jacksonville and Tony and Debbie Bohannon of Little Rock; four grandchildren, Kevin Bohannon, Bradley William Bohannon, Rachel Waddle and Robin Shepherd; three great-grandchildren, Jessica Waddle, Weston Bohannon and Erik Shepherd; his brother, Holland Bohannon of Port Neches, Texas; and his sister, Ruby Bohannon of Cabot. Services will be held at 2:00 PM, Thursday, May 8, 2014, in the Davis-Smith Funeral Home Chapel, Glenwood, with Dennis Gulledge officiating. Visitation will be Wednesday, 4:00 PM until 6:00 PM. Interment will be in the Hopper Cemetery. Pallbearers will be Bradley Bohannon, Kevin Bohannon, Joey Waddle, Tracy Deaton, Larry Don Deaton and Tim King. Guest registry is at www.davis-smith.com.

To order memorial trees or send flowers to the family in memory of William Fay Bohannon, please visit our flower store.