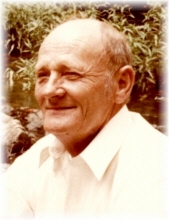 William Henry "Bill" Bradshaw, age 87, of Norman, passed to a better place on Sunday, December 28, 2014, at his home with his family around him. He was born on October 28, 1927 at Humphrey, Arkansas, the son of William Bradshaw and Ester Sturdivant Bradshaw. He was preceded in death by his parents; and three siblings, Luther Bradshaw, Ester Lee Apple and Horace Bradshaw. He was a United States Air Force veteran, retiring after 25 years of service. He raised cattle in Texas before his move to Arkansas in 1978. He continued raising cattle and working his hay fields until his retirement. He will be missed by all who knew him. He leaves behind his wife of 32 years, Jewel M. Bradshaw; his adult children, Shirley Jane Ewoldt, Linda Bendele, William H. Bradshaw, Jr., Joyce LeBlanc, Jenine Brown, Chris Crain, Tony Lussier and their spouses; his grandchildren; and great-grandchildren. Graveside services will be held at 3:00 PM, Tuesday, December 30, 2014, in the Black Springs Cemetery with Rev. Keenan Williams officiating. Pallbearers will be John Burbank, Tim Burbank, Joseph Stansberry, Hayden Burbank, Brad Crain and John Crain. Arrangements are under the direction of Davis-Smith Funeral Home, Glenwood. Guest registry is at www.davis-smith.com.

To order memorial trees or send flowers to the family in memory of William Henry "Bill" Bradshaw, please visit our flower store.