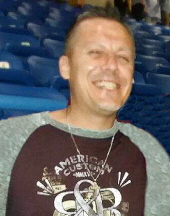 Anthony Plyler, age 42, of Glenwood, passed away Friday, May 15, 2020. He was born on May 30, 1977 in Hot Springs, the son of Mark and Velma Plyler. He was preceded in death by his paternal grandfather, Doc Plyler and his maternal grandparents, G. L. and Clara Wilson. Anthony was a member of Faith Tabernacle Church. He was a 1995 graduate of Mount Ida High School where he was active in sports and served on the Student Council. An avid sports fan, he adored the Dallas Cowboys, and supported the team whether they were winning or losing. When they were winning, he would always say, "How bout them Cowboys!" In his younger days, he also loved watching the Chicago Bulls and Michael Jordan. At runout, he would repeat the announcer saying, "And now heres your hometown Chicago Bulls!" He is survived by his parents, Mark and Velma Plyler of Glenwood; his son and daughter, Andy Plyler and Cloey Plyler, both of Hot Springs; the mother of his children, Brandi Thew Tweedle of Hot Springs; his paternal grandmother, Ina Marie Plyler of Glenwood; and several aunts, uncles and cousins. Graveside services will be held at 2:00 PM, Thursday, May 21, 2020 in the Rocky Cemetery, Rocky Cemetery Road, Sims, Arkansas, with Bro. Don Vaughn and Bro. Jerry Fagan officiating. Pallbearers will be David James, Drew Dickey, Ronnie Wilson, Shane Galloway, Kimberly Jones and Randy Plyler. Arrangements are under the direction of Davis-Smith Funeral Home, Glenwood. Guest registry is at www.davis-smith.com.

To order memorial trees or send flowers to the family in memory of Anthony Plyler, please visit our flower store.