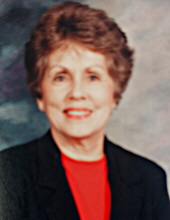 She was born on August 21, 1936, in Point Cedar, the daughter of Jasper Jerry Lambert and Etta Blanche Feazell Lambert. On September 7, 1958, she was married to the love of her life, James “Jimmy” Marable, who preceded her in death on February 13, 2022. She was also preceded in death by her parents; two brothers, Murl Lambert and Jerry Lambert; and one sister, Adgie Hughes.

She was a member of the Sweet Home Methodist Church. Estene graduated from Bismarck High School in 1955 and from St. Joseph’s School of Nursing in Hot Springs in 1958. After working at Baptist Hospital in North Little Rock and as the company nurse for Bruce Flooring Company, they moved to Glenwood. From 1965 until 1980 she was the RN for Caddo Valley Nursing Home. She would finally retire after serving as the first school nurse for the Lake Hamilton School District from 1981 until 2001.

She is survived by two daughters and son-in-law, Kristi and David Whisenhunt and Brenda (Troy Schaberg); six granddaughters and their spouses, Kay and Kyle Kinard, Mandi and Trent Ott, Ali Whisenhunt, Marla and Colt Daniels, Adi and Cody Self, and Makayla and Josh Tollett; and eleven great-grandchildren, Grady and Eli Kinard, Jacob and Owen Ott, Hadley and Reed Daniels, Emory, Audrey and Landry Self and Brexley and Zella Tollett; and two sisters, Bennie Lambert and Linda Smith and her husband, Morgan.

Services will be held at 3:00 PM, Saturday, February 26, 2022, in the Smith Family Funeral Home Chapel in Glenwood with Bro. Glen Harris officiating.

Interment will be in the Jones Cemetery.

In lieu of flowers, memorial may be made to the Jones Cemetery Association fund.

To order memorial trees or send flowers to the family in memory of Barbara "Estene" Marable, please visit our flower store.