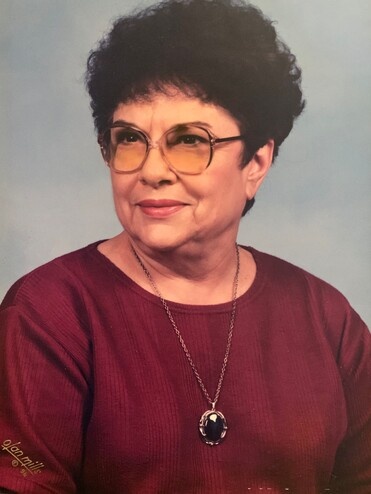 Betty Jo Conatser was born in rural Arkansas in 1926, her parents Garland and Lillian [Parette]Conatser.  She was the third of four children for the family and was preceded in death by

Betty was also preceded in death by her husband Floyd, daughter Sylvia Inmon (Eddie), her younger son Brian Morgan I (Tamie), and, grandson, Cory Johnson.  She is survived by her son P. Clay Sherrod of Petit Jean Mountain, eleven grandchildren and ten great-grandchildren and a great-great-granddaughter.

Living in western Arkansas where her father served as school principal in many public schools, Betty was an exemplary student through all grades, graduating as valedictorian of her class, and was a master of the Clarinet.  During WWII she assumed a job - as so many women did during the war - at the Jacksonville Ordnance plant, assembling ammunition for the fields of war overseas.  Betty met the love of her life while at at a military “dance night” at the base where Floyd, recently returned from combat overseas, was playing trumpet in his swing band performing for the large crowd of soldiers and workers.

My father's romantic pursuits with Mother were quite slow; Garland Conatser was very protective and strict with his children and at first was not smitten with the ex-GI, city slicker dance band trumpet player who had grown up in in the city of Little Rock.  But, from letters that he sent to mother - and several that he sent to her father attempting to explain his intentions and his love for Mother - it is clear that both Mother and Dad were very much in love and a respectful and excellent match for them both.  Within a couple of years - 1946 - the two of them married, even though resources were scant for them they began a family that would go on to have a rich legacy for the rest of time.

As with nearly all women in the 1940's, Betty was a stay-at-home mom,  and Floyd relied on his nearly-nightly trumpet/band performances throughout Arkansas and his new job as recreation director at nearby Fort Roots.  They moved into a very small and modest duplex on the corner of Short 17th street, just at the base of the "mountain" on which Fort Roots resides.  With a large front and side yard, the home was a wonderful start for what would be a very large family.

With limited funds, Betty Jo did what she could to provide meals for the growing family; her children remembered cheese toast, sometimes topped with asparagus when money permitted.....spaghetti with butter and milk only....and lots of Kool Aid.  But as kids, daughter Sylvia and sons Clay and Brian never wanted anything more; the Sherrod kids had parents that loved them and they made their own happiness inside and outside every day, swimming every summer day in a tiny pool, wading in the ditch in front of the house, and when she could find the coins, stopping the ice cream or Sno Cone trucks for a daily treasure once a week.

Specially memorable to the family were the night walks through the old narrow neighborhood streets after huge snowfalls, walking in nearly darkness until the next street lamp passed overhead....then she and Floyd gathering enough snow to finish the evening with snow ice cream.  The most anticipated treats for the kids during earliest years however might have been when the adults had company over on weekends.....it would be then, during those grown-up festivities, that the children were treated to a Coca-Cola each.

Betty Jo created a beautiful landscape at the Sherrod’s new home in 1956 in North Little Rock, the mountainous lot carved into a steep hillside where nothing would grow; nonetheless, her gift for growing beautiful plants overcame, because it became a lush jungle of beautiful plants within only a few short years.  She was a master at growing things, and even worked weekends as an advisor for a large nursery in North Little Rock because of her skills.  In the early 1960's she learned to drive and got her first vehicle, a white Chevy Corvair; soon after she began a career successfully as a credit collection manager and later started her own credit and collection company, a job which she continued until she retired decades later.

Shortly after, she left the large home on Cherry Hill and bought her new home at North Cedar in North Little Rock, where she resided with her beloved Chihauhau “Itzy” and yellowhead parrot “Loro” until her last year; and you guessed it:  it became quickly covered in lush gardens and beautiful flowers of all kinds.  Her grandchildren were always packed into her home, spending weekends bonding and she created a common focus for all of them as they grew into adults; Betty never met a stranger – her generosity was extended to a fault to people that she did not know, from church, while shopping or to laborers who would come do chores for her only to be “adopted” into her generous ways.  These strangers became her friends and she never turned anyone away who was in need.

Longevity is a trait of the Parette side of Betty Sherrod's family, as is hard work and discipline.  Tonight, May 6, 2022, Mother is still tending her gardens, but her flowers are now beginning to bloom in God's land.  Betty Jo Conatser Sherrod died at the age of 95.

To order memorial trees or send flowers to the family in memory of Betty Jo Sherrod, please visit our flower store.
Send a Sympathy Card