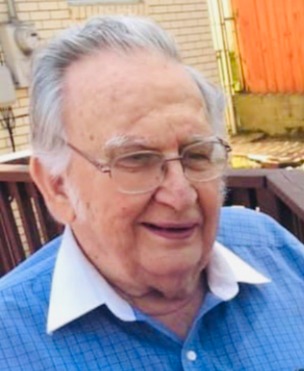 ﻿Bob Scott took his last breath peacefully at 3:58 PM on Sunday, May 15, 2022 with his daughter Sheryl holding his hand. After sustaining a broken arm, hip and neck on April 22nd, his body was unable to recover. He was born in Gravette, Arkansas on October 6, 1933. Bob was predeceased by his father Kenneth H. Scott, mother, Jeffa Beck Scott, of Rogers, Arkansas; brothers, “Diamond” Jim Scott, of Oklahoma and Darrell “Beck” Scott of Rogers, Arkansas; and his precious granddaughter, Natalie Kaye New.

At age 14, Bob became a shoeshine boy. He would say “May I shine your shoe for a nickel”, then after he finished the first shoe, he’d look up and say and “I’ll shine your other shoe for another nickel”. He also mowed yards for 50 cents.  He enlisted in the National Guard at the age of 16 and in 1951 was deployed to Korea as Battery Commander of 936 Field Artillery, 142nd group. When he returned from the war, he had enough high school credits to begin college at the University of Arkansas. After completion of law school, he started private practice in Rogers Arkansas. Politics soon became his passion. Bob ran and lost the race for state representative in 1962; then became the Rogers city attorney in 1963. Being involved in the Republican party, he caught Governor Winthrop Rockefeller’s attention and in 1967, was hired as his legal aid over prison affairs. At this time, the Scott family moved to Little Rock.  He even posed as a prisoner to uncover all the torture and unjust inhumane treatment in the Arkansas prison system, including the “Tucker telephone” and “the strap”.   In 1969, he became the chairman of the Pulaski County Republican committee and general counsel to the Republican party of Arkansas.  From 1969 until 1971, Bob served as the Commissioner of Revenue in Arkansas. In 1972, he resumed private law practice in Little Rock, until relocating back to his roots in Rogers, Arkansas in 1992.  During his active political years, he was fodder for Arkansas’ favorite political cartoonist, George Fisher. Bob said in an interview once those years were the “best years of his life; that being in the political limelight was addictive”.

Bob was known for his famous letters to the editor in the Arkansas Democrat Gazette, his passionate political views which changed after the George W. Bush administration from republican to democrat, the joyous quartets he belonged to his entire life, his fiery religious discussions, his slides and 8mm movies of all family outings, his love for cooking the perfect rare steak for friends, his love of Lancer’s wine and Austi Spumante, his zealous love of his grandchildren, and especially his deep unconditional love of all of his dogs, beginning in the 1950’s with Tanker, Twisty, Halley, Itty-bitty, Charlie, and lastly Izzy. Bob will be remembered as passionate, strong yet gentle, super intelligent, a fierce political combatant, for always being there when anyone needed him, his beautiful tenor voice, being a lover of babies and dogs and a loyal friend to the end.

Bob’s life will be celebrated at Loca Luna, 3519 Old Cantrell Road, Little Rock (where he enjoyed celebrating others’ special occasions) on Thursday, May 19th from 5:00 pm-7:00 pm. Donations may be made to the Pulaski County Humane Society in lieu of flowers.

To order memorial trees or send flowers to the family in memory of Bobby "Bob" Scott, please visit our flower store.
Send a Sympathy Card