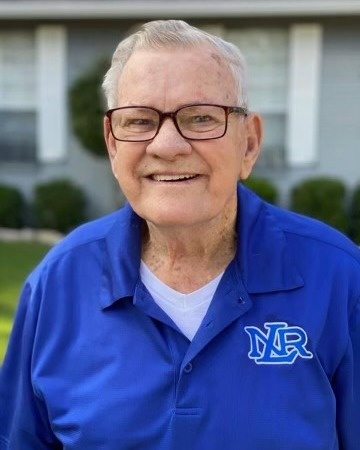 Carol “Coach” Henry died peacefully on May 3, 2022.  He was born in 1930 outside of England, Arkansas, at the “Tankersley” place and he didn’t have a birth certificate until he was 17 years old.  His parents were Burt Dallas & Jo Eddie Henry and he had 4 brothers, Burt Jr., Joe, David, and Fred, and two sisters, Dahlene and Peggy.  In 1942, when the older boys went to war, Carol and his brother David had to run the town dairy and get up every day at 3:00 a.m. to milk the cows before attending school.  By the ripe age of 12, Carol was driving the school bus!

Coach attended Lonoke High School from the 7th – 11th grades.  He met the love of his life, Saville Henry, when he was in the 9th grade, and they dated all the way through high school.  In his Senior Year he transferred to Central High School and played for the Wilson Tigers under Coach Wilson Matthews.  He left Central High School at mid-term to go to the University of Arkansas on a football scholarship.  He started his freshman year and got to play Notre Dame at War Memorial Stadium where he scored a touchdown on a long pass.  As part of a fraternity, he won an intramural track meet and was recruited by the U of A to run for the track team.  He ran the 100-yard dash in 9.9 seconds in tennis shoes.

Carol and Saville were engaged in the summer before his freshman football season.  They were married at Lonoke Methodist Church on March 30, 1952, and at the end of the semester Carol dropped out of school to remodel a house on his father’s farm where they were going to live.  Ironically, he was drafted three months later and was in the army for 21 months.  He went into basic training at Fort Sill, Oklahoma, then was stationed in California and Pirmasens, Germany for 11 months.  After he was discharged, he went to Teacher’s College in 1954 and played football for two seasons.  He coached in England in 1956 and in 1957 he was hired to coach in Paragould.  His daughter Cindy was born in 1957 and his son Cal was born in 1959.  Coach paid for their births by running the Country Club swimming pool during the Summer.  The family moved to North Little Rock in 1964 and Carol was the head track coach and assistant football coach for North Little Rock High School.

In 1970, Coach Carol Henry became the first principal at the newly built Lakewood Junior High. He also served on the Pulaski County Quorum Court for 18 years and was a State Legislator for two terms.  In the legislature he co-authored House Bill 1093 subtitled “No Excuse Absentee Balloting” that allowed for early voting in Arkansas and remains in effect to this day.  When his father, Daddy Burt, died in 1977, Coach retired from education to manage Lonoke Henry Farm and Protho Manor Apartments.

He shared 62 years of marriage with Saville Henry before she died in 2013.  Throughout their lives together they were actively involved in church, community service, and social activities.  They enjoyed love, laughter, dancing, playing cards, and spoiling their two beloved grandchildren, Heather, and Tyler Lindsey.  Coach Henry also loved duck hunting and sharing laughs with his best friend in life, Carl Lacy. He made daily trips to BJ’s for lunch and loved taking his dog Parker to his farm in Lonoke. He was known for his “MalaCoachisms”, a mistaken or intentional misuse of a word or phrase. He had a devout faith and was an active member of Lakewood United Methodist Church, where he held court on the back row.

Memorials may be given to the Saville Henry Endowment Fund at Lakewood United Methodist Church or to Camp Aldersgate.

A visitation will be held 4:00 PM – 6:00 PM Thursday, May 5, 2022, at Smith North Little Rock Family Funeral Home (1921 Main Street).  A Celebration of Life Service will be held in the sanctuary at Lakewood United Methodist Church on Friday, May 6th, at 1:30 p.m. followed by interment at Griffin Leggett Rest Hills Cemetery.

To order memorial trees or send flowers to the family in memory of Carol "Coach" Henry, please visit our flower store.