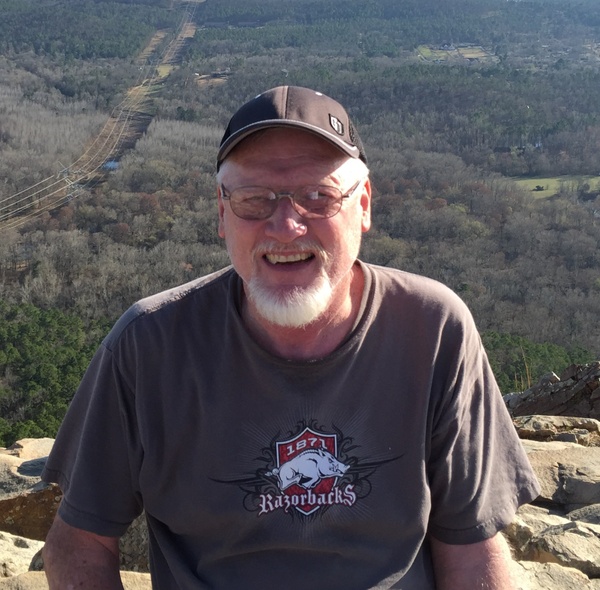 David Franklin "Rhino" Rinehart, 71, of East End, passed away from this life on Friday, July 8, 2022. David was born on August 11, 1950 in Little Rock, Arkansas to John Franklin and Ethelyn Hester Rinehart. He was a 1968 graduate of Little Rock Central High School. He attended  Little Rock University where he lettered on the baseball team. Soon after, he would meet the love of his life, Nancy McDonald, and they would wed on December 30, 1970. Together, they would create a beautiful life together.

He had a great love for baseball, fast and slow-pitch softball, whether it was playing the sport, watching or coaching his kids. He loved to attend rock concerts with his kids. David was especially good with children, often dressing up in costumes for various events and holidays.

After 41 years with the United States Postal Service, David retired and spent his later years enjoying his family and especially his grandchildren. He was a longtime member of Sandstone Drive Church of Christ.

Left to cherish his memory is his wife of 50 years, Nancy Rinehart; son Jason Rinehart, daughters Aubrey Futch (Brandon) of Bauxite, and Rachael Mizell (Chris) of Little Rock; grandchildren Rylin and Tynlee Futch and Zane Mizell; brothers Tim Rinehart (Teresa) of Bryant, Tony Rinehart of Little Rock, and a host of extended family that will miss him dearly. David is preceded in death by his parents.

The family would like to extend a very special thank you to Dr. Mikeal Love and staff with Arkansas Hospice for their compassion shown to David and the family during his time there.

David graciously donated his body for research and education to the University of Arkansas for Medical Sciences (UAMS) Anatomical Gift Program. This gift will allow David to educate future doctors, medical students, nurses, physical therapists, and other members of the health service profession. Without this study, there could be no doctors, no surgery, no alleciation of disease or repair of injury.

A memorial service to celebrate his life will be held on Saturday, July 16, 2022 at Sandstone Drive Church of Christ in Little Rock at 11:00am. Visitation will be 1 hour prior at 10:00am.

In lieu of flowers, the family requests donations be made in his memory to Arkansas Hospice Foundation, 14 Parkstone Cir., North Little Rock, AR. 72116.

To order memorial trees or send flowers to the family in memory of David Franklin "Rhino" Rinehart, please visit our flower store.
Send a Sympathy Card