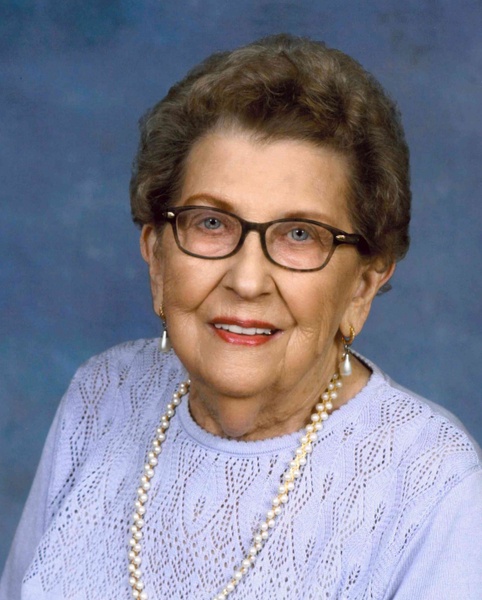 Dorothy Jean “Dottie” Peterson Stewart passed away June 20, 2022, from complications following hip surgery. Dottie was born May 13, 1925, in Duluth, MN, adopted as a toddler, and raised as an only child by Andrew and Alma Peterson. Upon graduation in 1943 from Duluth Central High School, she worked in Washington DC, New York City, and Stockton, CA.

After moving to San Diego, she met a Navy chief and native Arkansan, Buster Stewart, and they married in 1950. Over the next 10 years, they served in Oak Harbor, WA, where their daughter Andrea was born, and in San Diego. Buster was then assigned to NAS Millington, TN, where their son Scott was born. The Navy sent them to San Diego once more, then back to Millington, where Buster retired from the Navy in 1968.

Buster and Dottie bought a farm and the family moved to Franklin (Izard County), AR in 1969, where Dottie became a farm wife, a role she found very fulfilling. They raised cattle and enjoyed life together on the farm for 34 years.

During this time, Dottie joined the local Extension Homemakers Club, which promotes homemaking skills, continuing education, and community service. She held many leadership positions within the organization, even serving as State President from 1985-1987. Governor Bill Clinton presented her with the State Friend of Extension award in 1986 for her years of service and support of the Arkansas Cooperative Extension Service. Her involvement with Extension Homemakers at the local, state, and national levels led to a position on the advisory committee for the LeadAR program, an Agricultural & Rural Leadership Program of the Arkansas Cooperative Extension Service. These organizations allowed her to travel throughout the state and all over the country, which she thoroughly enjoyed.

A few years after Buster’s death, Dottie moved to Benton, AR in 2007 to be closer to family. She attended Spring Creek Baptist Church and continued her involvement with LeadAR and the Arkansas Extension Homemakers Council until arthritis curtailed her activities.

Dottie never met a stranger and made many friends over the years. She was an excellent homemaker and loved taking care of her family.  She also enjoyed cooking, sewing, arts and crafts, oil painting, and gardening. When she married Buster, she gained a family of brothers- and sisters-in-law, nieces, and nephews, all of whom she loved dearly. Those who mourn her passing include her daughter and son-in-law, Andrea and Ron Burcham, and her son, Scott Stewart, as well as extended family and dear friends.

A memorial service will be held on Saturday, July 16, at 11:00 am at Spring Creek Baptist Church in Benton, AR.

To order memorial trees or send flowers to the family in memory of Dorothy "Dottie" Stewart, please visit our flower store.
Send a Sympathy Card