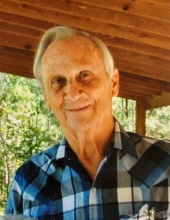 He was born on June 16, 1935, in Hot Springs, the son of Amos Meredith and Winnie Ray Meredith. On August 1, 1954, he married the love of his life, Norma McInvale. He is preceded in death by his parents; one son, Glenn Meredith; and his son-in-law, Ronnie Boyette.

Gary graduated from Hot Springs High School in 1953. At a young age, he started working as a paperboy for the Hot Springs Sentinel-Record, and he eventually retired from the pressroom after 49 years and 7 months, but he continued to mow yards long into his seventies. He was so proud of having 12 great-grandchildren, and he loved to spend time with them, taking them on Christmas hayrides, cooking their favorite foods, going on walks to the pond, and telling them stories. He will be greatly missed by all that knew and loved him, but we know he was greeted by those who went before him.

Memorial services will be held at 10:00 AM, Thursday, February 10, 2022, in the Smith Family Funeral Home Chapel, Hot Springs.

Memorials may be made in Gary's honor to Center Fork Baptist Church.

To order memorial trees or send flowers to the family in memory of Gary Ray Meredith, please visit our flower store.