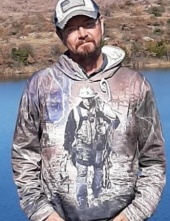 Georgie “Bubba” McMurtrie, Jr., age 41, of Daisy, passed away peacefully with his loving family by his side, on Friday, January 21, 2022.

He was born on July 1, 1980, in Dowagiac, Michigan, the son of George Neil McMurtrie, Sr. and Sarah Lynn Blackmond McMurtrie. He was preceded in death by his father, and his special cousins, Curt Oneal and BJ Oneal.

He was a highly experienced and excellent independent lineman who was sought after by many companies due to his fearless ability to climb and go where no other men dared to go to get the job done. He was Baptist in his faith. He enjoyed hunting, fishing, riding four-wheelers, but his greatest joy in life was when he was spending time with his son, Trey, his girlfriend, Shandi and all his family members. Bubba was an awesome Dad, son, brother, boyfriend, and friend to many, and he fiercely loved each and everyone and fought to the very end to enjoy every moment with his family. Bubba will truly be missed by all who knew and loved him, but he will never leave our hearts.

He is survived by his son, George “Trey” Neil McMurtrie, III of Daisy; his parents, George and Sarah McWhorter of Daisy and Tommy Cook of Glenwood; his sister, Tammy Sorters of Hot Springs; his brothers and sisters-in-law, David and Kim Maleski of Hot Springs and Scotty and Alisha McWhorter of De Queen; his girlfriend, Shandi Oneal and her son, Willie, both of Glenwood; and numerous nieces, nephews, extended family members and a host of wonderful friends.

Interment will be in the Old Union Cemetery, in Lockesburg.

Honorary pallbearer will be Kelly Golden.

To order memorial trees or send flowers to the family in memory of Georgie "Bubba" McMurtrie, Jr., please visit our flower store.