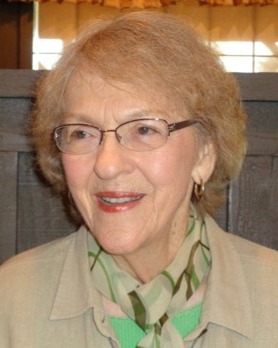 Geraldine Souder Bechtel Hardison Stiedle passed from this life January 5, 2023. Geri was born to Norman and Irene Bechtel at home in the farmhouse in Spring City, PA, on August 1, 1933, the first of eight children. She married Jim Hardison in 1971, who died in 2003, and married Paul P Stiedle in 2007.

As a child, Geri attended a one-room schoolhouse, completing only eight grades before leaving school to work. She worked on the farm, cleaned houses, and sold produce at the Central Market in Philadelphia. She later earned her GED and was the first in her family to go to college. Geri earned a bachelor’s degree in nursing at Eastern Mennonite College, a nursing degree from Reading Hospital, and a master’s degree in nursing at the University of Pennsylvania.

Her professional life includes serving in Volunteer Services through the Mennonite Church and working as a nurse at Eastern Mennonite College, the Philhaven Psychiatric Hospital in Lebanon, PA, and in Calico Rock, AR. She also taught psychiatric nursing at the University of Arkansas at Little Rock. Upon retirement, she focused on church and helping others. Over the years, she sang in the choir, participated in Sunday school, and was a member of the prayer team and the women’s group. Most recently, she attended Highland Valley United Methodist Church in Little Rock and helped with the Bible studies led by her husband, Paul.

Family was important to Geri. Although she had her family in the Little Rock area, Geri went back to the Spring City homestead as often as possible. She enjoyed family reunions and over 20 years of sister reunions, meeting anywhere from Pennsylvania, Ohio, Little Rock, family homes, camps, and the Jersey shore. She loved flowers, playing the piano and accordion, singing, and her Boston Terriers.

Geri has donated her remains to the University of Arkansas Medical School. A memorial service will be held January 19 at 2:00pm at Highland Valley United Methodist Church in Little Rock. To watch the livestream, go to www.hvumc.org.
Arrangements by Smith Little Rock Funeral Home.
To order memorial trees or send flowers to the family in memory of Geraldine "Geri" Stiedle, please visit our flower store.