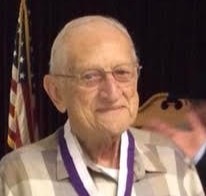 James Dennis Glover, 85, of North Little Rock passed away February 11, 2022. He was born August 15, 1936 in North Little Rock to Jackson Hinkle Glover and Mary Edith Hammons Glover. He graduated from North Little Rock High School in 1954. After graduation, he worked at Crites Chevrolet where he met his wife, Nellie Dunn Glover, and they married in 1958. Dennis began his army career in 1961 with the Arkansas National Guard at Camp Robinson, ultimately achieving the rank of major. He was the traffic manager where he was responsible for all inbound and outbound freight as well as passenger traffic. In 1977 he was responsible for moving the first Arkansas National Guard unit to Europe and return. After serving his country for 22 years Dennis retired in 1983.

Dennis was a Mason for nearly 55 years, having received his Masonic Degrees in 1967 at Mt. Sinai Lodge No. 749 in Levy. In 2015, his membership moved to Sylvan Hills Lodge No. 754 with a merger of the two lodges. He was also a member of Bendemeer grotto, M.O.V.P.E.R in Maumelle. Dennis enjoyed volunteering at North Little Rock Memorial Hospital and Springhill Baptist where he devoted over 9,000 hours of his time. He was a proud member of Amboy and Levy Methodist Church and participated in Methodist Men. His hobbies included scuba diving, flying model airplanes, camping, and gun collecting.

He is preceded in death by his parents; his wife of 56 years; one brother, Jerry Glover; and one sister, Ann Dotts.

To order memorial trees or send flowers to the family in memory of James Dennis Glover, please visit our flower store.
Send a Sympathy Card