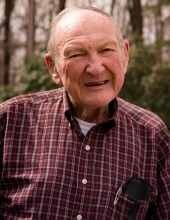 Jimmy, as he was known to most, grew up in Amity, the son of the late Hollis C. Marable and Ann Adele Kirksey Marable. He earned a college degree from Henderson State University and served in the ROTC. On September 7, 1958, he married the love of his life, Barbara Estene Lambert. He and Estene briefly lived and worked in Little Rock, returning to Glenwood to help his mother with the family business when his father was no longer able to.

Jimmy owned and diligently operated Glenwood Auto Parts until he retired at the age of 65 and closed the store. He and Estene attended the Methodist church, where he acknowledged acceptance and never doubted Jesus as Lord. He enjoyed taking care of his yard and land, playing tennis, going on motorcycle rides, square-dancing and water skiing, which he loved teaching anyone that was interested. Most of all, his home was his castle, and seldom did you pass by that he wasn’t seen on his old tractor. He didn’t do anything halfway, could fix or repair anything and always had projects going on in his shop. Jimmy loved his family and had a big soft spot for his pets.

He is survived by his loving wife of 63 years, Barbara Estene Marable; two daughters, Kristi (David) Whisenhunt and Brenda (Troy Schaberg); six granddaughters and their spouses, Kay and Kyle Kinard, Mandi and Trent Ott, Ali Whisenhunt, Marla and Colt Daniels, Adi and Cody Self, and Makayla and Josh Tollett; and eleven great-grandchildren, Grady and Eli Kinard, Jacob and Owen Ott, Hadley and Reed Daniels, Emory, Audrey and Landry Self and Brexley and Zella Tollett.

Services will be held at 2:00 PM, Wednesday, February 16, 2022, in the Smith Family Funeral Home Chapel in Glenwood with Bro. Bobby Lock officiating.

Visitation will be held Wednesday, 1:00 PM until 2:00 PM, prior to the services.

Interment will be in the Jones Cemetery.

The family wishes to extend a special thank you to his caregivers.

To order memorial trees or send flowers to the family in memory of James "Jimmy" Thomas Marable, please visit our flower store.