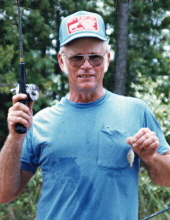 Jimmie West, age 87, of Glenwood, passed away on Sunday, December 12, 2021, at his home surrounded by his loving family.

He was born on February 25, 1934, in Caddo Gap, the son of Troy F. West and Mattie Hayes West. On September 3, 1957, he was married to the love of his life, Etna J. Wright who preceded him in death on March 17, 2018. He was also preceded in death by his parents; his brother, Paul “Bud” West; and his sister, Dorothy Pinkerton.

He was a faithful and dedicated member of Bethel Missionary Baptist Church. He served as a deacon of his church for many years. Retired from Arkansas Power and Light, he and Etna began a new chapter in their lives when they adopted three grandsons and a young man form Caddo Hills. He was an avid sports lover and followed Caddo Hills basketball religiously. Jimmie was also the electrical safety officer at War Memorial Stadium for over twenty years and benefited by having a thirty yard line seat reserved for him for all events. The stadium never had an electrical outage during his watch!

He is survived by his daughter and son-in-law, Diane and Randy Castle of Glenwood; five sons and one daughter-in-law, Donnie and Joyce West of Norman, James West and Kevin West, both of Glenwood, Billy West and Josh Duncan, who he helped raise as his own son, both of Mount Ida; his granddaughter and her husband, Shonda and Ryan Garland of Glenwood; three great-grandchildren, Kayson West and his mother, Kim Null, Dalton Barrett and Colton Barrett and their mother, Tara Barrett; two sisters-in-law and two brothers-in-law, Clarice and Ray Connell of Glenwood, Linda and Bobby Driggers of Royal; two brothers-in-laws and three sisters-in-law, Robert and Brenda Wright of Glenwood, Ernie and Linda Wright of Little Rock and Carole Wright of Glenwood; his nieces, nephews, extended family members; and a host of wonderful and loving friends.

Following cremation, interment will be in the Mount Tabor Cemetery.

Honorary pallbearers will be the deacons of Bethel Missionary Baptist Church, Dr. Lingyi Chen and staff of the CHI Cancer Center, Dr. Matthew Hulsey and staff of Glenwood Family Medicine and the nurses and aides of Elite Hospice of Mena.

Memorials may be made to Bethel Missionary Baptist Church, PO Box 315, Glenwood, Arkansas 71943.

To order memorial trees or send flowers to the family in memory of Jimmie West, please visit our flower store.