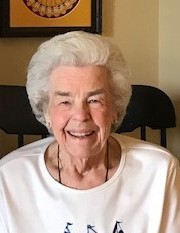 Margaret (Meme) Parris Moser passed on February 7, 2022. She was 90 years young. She was born in Scott, Arkansas to Nettie James Crowder and Hazel Lewis Parris.

Margaret retired from Ryder Truck Rental after working there for 28 years. She then went back to work at Ryder part time until she was 88 years old.

Above all, mom was proud of her family. She never met a stranger and would tell everyone that she had two daughters, four grandchildren, and nine great grandchildren.

She was preceded in death by her parents and a son in law Joel Tabor.

She is survived by her two daughters, Ann Tabor of Harrison and Jan Brune and husband Dennis of Greers Ferry. Four grandchildren, Keri King of Bergman, Ryan Tabor of Harrison, Scott Brune and wife Tisha of North Little Rock, and Caitlyn Buckman and husband Seth of Jacksonville. The joys of her life were the nine “greats” listed in order of age, Kelsey King, Gavin Beaver-Tabor, twins Kylie and Jacob King, Hannah Brune, Huxley Tabor, Owen Brune and twins Rebekah and Callie Buckman. She is also survived by her sister Robbie Pearce of Conway.

The family would like to thank her loving friends Sandra Hicks, LaVonne Smith, Jackye Krebs, Kathy Beaver, and Donna and John Daly.

Funeral services Saturday, February 19, 2022, at 10:00 AM at Smith North Little Rock Funeral Home with visitation one hour prior. Interment will follow the funeral service at 11:00 AM at Rest Hills Memorial Park.

To order memorial trees or send flowers to the family in memory of Margaret Moser, please visit our flower store.
Send a Sympathy Card