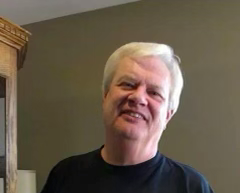 Mike was raised in Blytheville and spent many days playing on the levee with his cousins. He is survived by his wife of over 40 years, Melany Smith Hayes; daughters:  Jessica Lynn Hayes and Jennifer LeAnn Withers (husband Anthony); grandchildren:  Alexis Gabrielle Tatum (husband Braxten), Kenleigh Grace Hayes and Ezra James Hayes; two sisters:  Patty Jean Wilson and Donna Sue Franks (husband John); and his mother-in-law, Brenda Smith; and a host of cousins, nieces, nephews and friends.

Mike will be remembered for his great smile. He loved the Razorbacks and working in the flower garden with his grandson, Ezra.  He made a living for his family as a painter, and owned his own company, Hayes Painting. He enjoyed music of all kinds and made lots of friends throughout his career and into his retirement.

Visitation will begin at 4:00 PM, followed by a celebration of Mike’s life at 5:00 PM, Wednesday, March 9, 2022 at Smith North Little Rock Funeral Home.

To order memorial trees or send flowers to the family in memory of Michael J. "Mike" Hayes, please visit our flower store.