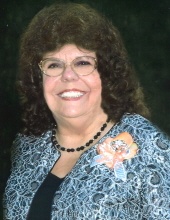 She was born on January 6, 1943, in Amity, the daughter of Ebb Draper and Artha Mack Draper. On June 25, 1960, she married the love of her life, Leroy Funderburk, who after 54 wonderful years of marriage, preceded her in death on February 11, 2015. She was also preceded in death by her parents; three brothers, Billy Draper, Don Draper and Vernon Draper; and three sisters and brothers-in-law, Betty and Eugene Fant, Melba and Lewis Kennedy and Lema and Ford Massey.

She was a faithful lifelong member of Daisy Church of Christ and held fast to her faith until the very end. Patricia was a professional seamstress, owning her own business for over 30 years, where she loved to design and personally sew wedding dresses and gorgeous sparkling pageant dresses. She was well known for designing dresses for individuals all over the state and beyond, but Patricia especially loved making her elegant pageant dresses for her granddaughters.

Above all, Patricia was a wonderful wife, mother, grandmother, great-grandmother, sister and friend, who loved her family with all her heart. When she was not busy sewing her beautiful masterpieces, her greatest joy in life was spending time with her family. Patricia was truly cherished by all who knew and loved her, and she will be deeply missed.

Visitation will be held Friday, 1:00 PM until 2:00 PM, prior to the services at the funeral home.

Interment will be in the Mount Joy Cemetery in Daisy.

Honorary pallbearers will be the nurses and staff of the Glenwood Health and Rehab; and her special Kindred Hospice nurse, Kelly Helms.

To order memorial trees or send flowers to the family in memory of Patricia Draper Funderburk, please visit our flower store.