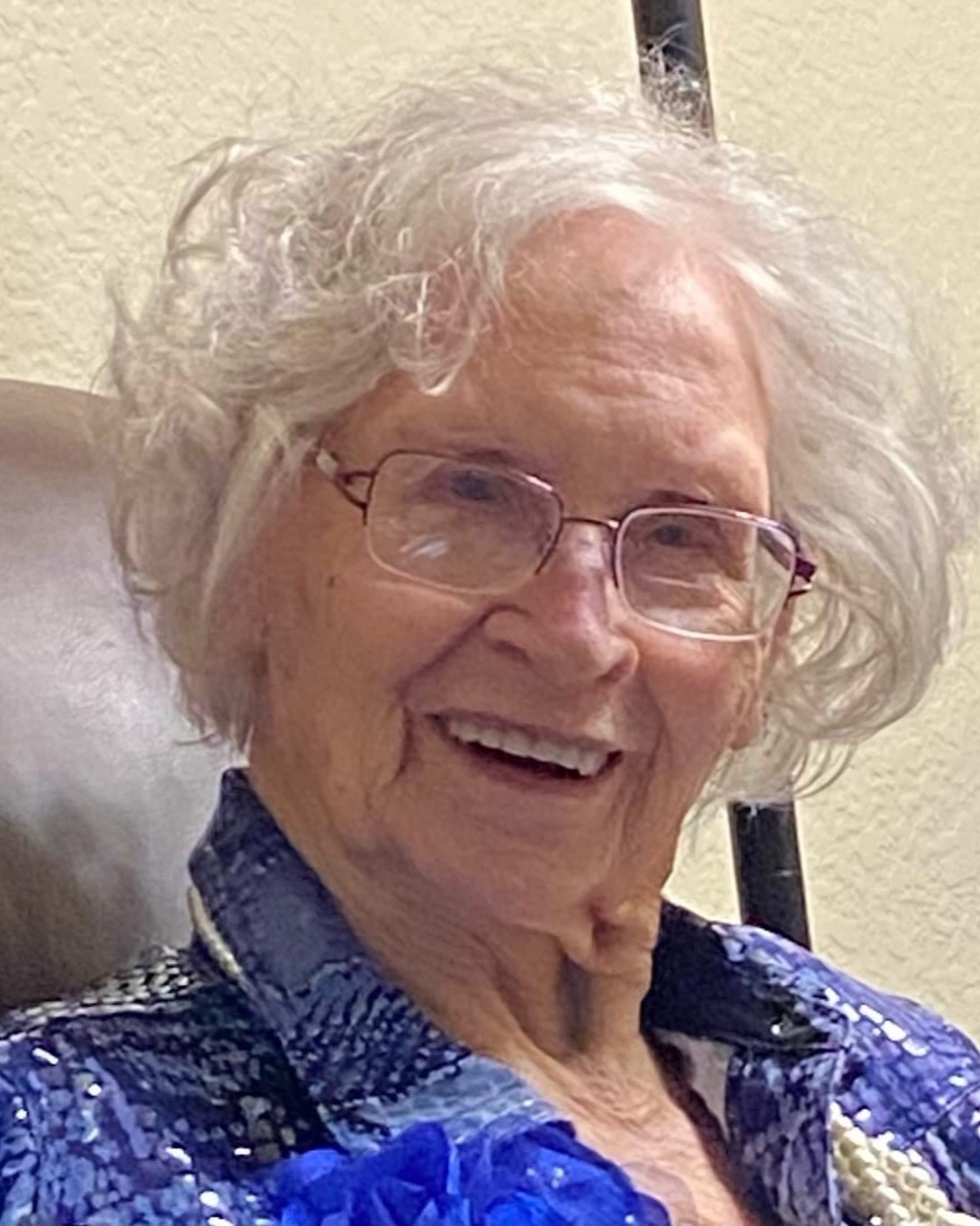 Reba (Wiedower) Lawrence departed on her heavenly journey on December 26, 2022, at 96 years of age. She was a loving mother, grandmother, and great-grandmother. She was preceded in death by her Parents, James Sr., and Sibyl (Stacks) Wiedower, her husband Howard “Buddy” Lawrence, her brothers Billie George and James Wiedower Jr. and a beloved grandson Tyler Lawrence. She was born in Guy Arkansas on May 15, 1926, and graduated from Guy high school. She is survived by her sister, Dorothy “Dot” and brothers, Floyd “Sonny” (Betty) and Ben (Donna). She leaves to cherish her memory daughters, Karen Lawrence, Cindy Garner (Nathan) and son, Jeffrey “Jeff” Lawrence. Her very special blessings are her grandchildren: Blaire LaVoy-Fuller (Chad), Brooke Matamoros (Dave), Nikki Caldwell (Scott), Brittany Caldwell (Phillip) and Conner Lawrence (Aubrey) who affectionally called their grandmother “Gogie” as did her great-grandchildren, Harper, Hudson, Preston, Logan, Reid, Zane, Zenleigh, Nicholas and Amy. She leaves to cherish her memory a host of nephews, nieces and friends.

Reba was a lifelong member of the Church of Christ beginning in Guy, then Conway and finally attended the Levy Church of Christ in North Little Rock for more than 60 years, where she enjoyed many friendships over those years at the Levy Church. She and Buddy opened and operated the first Roller Rink in Conway – Buddy’s Roller Rink. She worked alongside and encouraged Buddy in their other business enterprises over the years. She was an avid Quilter and for years was a member of the Arkansas Quilters Guild in North Little Rock. She told one granddaughter, when giving her a quilt for graduation, “boy was I a good Quilter”. Reba was a fitness buff and would work out in her son Jeff’s fitness center 3 days a week and did so until her late 80’s when she had to quit driving due to eyesight concerns. During one of the Stack’s Family Reunions in Burns Park about 10 years ago, she dropped to the Pavilion Floor and showed some young men standing by how many pushups she could do. No one accepted her challenge and quietly walked away. When one of her cousins recently asked her how long she had been taking vitamins and minerals she told him about 50 years. She stopped taking them after she was moved into Hospice.

The family wishes to thank the many medical professionals who attended to Reba during her stay at Brookdale (especially Marilyn and staff who cared for her more than 4 years), Sommerset, Fox Ridge and most recently at Arkansas Hospice’s St. Vincent Infirmary Hospice Unit for the last 6 weeks. You were all superb in the final days with your love and care for Reba; our Gogie. At each of the facilities the staff would comment how sweet Reba was and she could often be overheard saying “Thank You” each time assistance of any kind was provided whether feeding, bathing or even getting her a cup of cold water. Thank You, seems so insufficient for all the care and love shown to our mom/Gogie.

In lieu of flowers Reba would be happy for you to remember her life by you making a donation to the Children’s Home Inc., Paragould Arkansas. Reba has financially supported this Home for years as they have cared for hundreds of orphaned children since 1955. Their mailing address is 5515 Walcott Road, Paragould AR 72450 or you can give online at childrenshome.org. Funeral services are provided by Smith Funeral Home Little Rock, AR. Visitation will begin at 10:00 AM and Memorial Service at 11:00 AM January 7, 2023, 8801 Knoedl Ct Little Rock.

To order memorial trees or send flowers to the family in memory of Reba Lawrence, please visit our flower store.