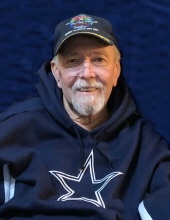 Bob was born on November 24, 1953, in Hot Springs, the son of Gene Hall and Marg Jackson Hall. He was preceded in death by his father. Bob married Kathy Barker on October 25, 1980.

Bob was a graduate of Hot Springs High School, Class of 1972 and attended Arkansas State University. He was employed immediately by, family business, Hall Printers. Bob began hanging around the airport as a young teen and never lost his love of aviation, this led him to start his own company, “Diamond Lakes Aviation”, and fostered many domestic and international friendships. Later after retirement he was employed, part time, by Best Buy, where “Mr. Bob”, was occasionally top salesman; when he got sick, he was kept on the payroll; they were obliging to his time and really showed they cared for him, the family would like to say, “thank you so much”.

Bob loved riding his antique motorcycle and his four-wheeler on many outdoor adventures. Eleven years ago, he and lifelong friend, Steve Linder, started, “The Redneck Rotary Club”; what started as a meeting between two friends has grown to include multiple friends and acquaintances over the years. This was one of his favorite weekly pastimes. He was known for his vast knowledge as he never forgot anything and was always up for a friendly debate. Bob loved both the Arkansas Razorbacks and Dallas Cowboys, and never missed a game.

Bob’s greatest joy in life was his family, especially his “grands”. He loved picking them up at the bus stop, taking them for rides and spending Sunday afternoons with them. Even his ringtone was Chloe telling Pawpaw his phone was ringing. He will be missed by all, and he takes a piece of our heart with him.

He is survived by his wife of 41 years, Kathy Hall; his mother, Marg Hall; his son and daughter-in-law, Robbie and Ashley Hall; his daughter and son-in-law, Casey and Chad Powell; his grandchildren, Chloe, Dominic, Claire, Creed and Emily, all family members are of Hot Springs; his sisters and brother-in-law, Leann and Mike Taylor of Hot Springs and Lyni Bailey of Oklahoma City, Oklahoma; his other brother-in-law and sisters-in-law, Jimmy and Tina Barker of Hot Springs, Debbie Neev of Laguna Beach, California; numerous nieces, nephews, extended family members and many good friends.

A celebration of Bob’s life will be held at 2:00 PM, Friday, January 7, 2022, in the Davis-Smith Funeral Home Chapel, Hot Springs.

Honorary pallbearers will be, Steve Linder, Paul Scrivner, Steve Brooks, as well as all past and present members of the Redneck Rotary Club, co-workers of Best-Buy, Dr. Bobby Muldoon and Dr. Randy Hill.

To order memorial trees or send flowers to the family in memory of Robert "Bob" Hall, please visit our flower store.